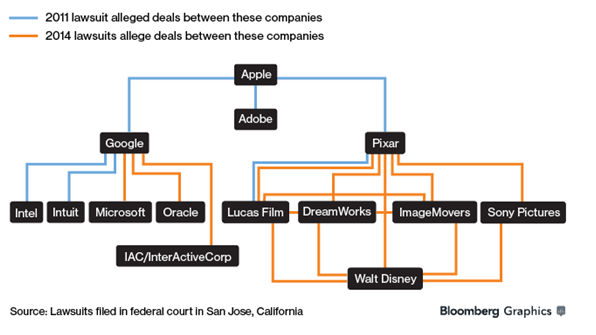 Here’s what you need to know about the wage-fixing lawsuit. It’s real. Make sure your contact details are correct.

If you worked at any of the following companies during the time periods listed, read the FAQ below to see if your job title is listed. If yes, you’re a class member.

If you think you are in the class, but have not ever received anything in the mail, it is likely because the Class Administrators don’t have a correct address for you. Contact them and update your address.

Or, maybe you threw away the paperwork, thinking it was a scam. Either way, contact the class administrators to confirm whether you are in the class or not.

Here’s the timeline of some key dates – some court documents courtesy of Deadline:

Estimated damages of ~$170 million in total have been calculated by Dr. Orley Ashenfelter, an economics professor at Princeton.

The calendar for Judge Lucy H. Koh is below – March 2nd is the next scheduled hearing, to be held in San Jose, CA.

http://www.cand.uscourts.gov/lhkIt has been estimated that there are over 10,000 affected artists. It’s not possible to predict what an inpidual award might be after attorney fees. For the High-Tech lawsuit, the settlement amount was estimated at $4,000.

If you’re in the class, and the Class Administrators have your contact details, you will be notified of the results of the settlement.