Opt-in to get important texts here! 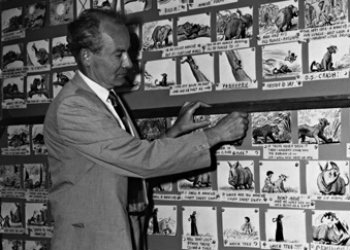 At Tuesday night’s General Membership Meeting, there was a lengthy back-and-forth on storyboard artists, their current pressures and current schedules.

Show schedules are too short.

Production people want way more panels than a “Bill Peet” style board. You have to almost animate the action for the animatic.

In features, they throw out part of a sequence and want you to reboard three new pages of script Friday to Monday, so you work all weekend.

There are feature supervisors who brag on-line that they’re working on a show until 2 A.M.

Artists work unpaid overtime because they’re afraid they’ll get laid off if they don’t keep the quality up and meet the show’s deadlines.

New board artists come in and have no problem working late for no pay. They’re happy to be working and have a job. …

The issues that cropped up at Tuesday’s gathering are much the same as those here, a couple of years ago. Among the complaints then:

2) The general corporate/department rule (with exceptions) that: “There’s NO money in the budget for overtime, so DON’T ASK.”

3) The issue of multi-tasking. Board artists today often have to A) Design, B) Be layout artists, C) Work as animatics editors, D) Pose out animation. …

Members noted that a lot of artists are frightened of losing the gig, and so work uncompensated overtime to hang onto their jobs.

The Business Representative (me) responded that studios complain that they can’t find skilled, experienced board artists now, so there is not a lot of truth to the fear of layoff.

(Another artist said that he knows of a slow co-worker who has been late with his assigned shows time and again, yet has never been laid off. In fact, the artist has seldom if ever heard of anyone being laid off because of slowness.)

Production management expects a lot more drawing, acting and movement in digital story reels than it did fifteen years ago. The observations that a “Bill Peet storyboard” wouldn’t work today is right as regards the number of drawings a modern board requires, but not right as regards acting and image quality.

What’s needed in the workplace is:

1) A culture where no overtime is worked unless it’s paid for. (“Forty hours means forty hours.”)

4) The knowledge that every studio (and every show inside a studio) is somewhat different. (The production manager on Show X is flexible and understanding about problems; the show creator on Show G wants the characters precisely on models and you’d better not be late turning in your work.)

If you have the chops to create a superior board, in today’s job market you’ll likely be in demand. Right now, the studios need artists who know what they’re doing.