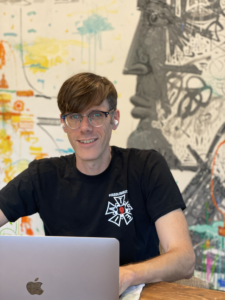 If you’re anything like me, the idea of calling strangers out of the blue might induce a little bit of… social anxiety. I’m an introvert — and considering we are a big group of creatives, I’m probably not the only one. So I have to admit, at first, I was hesitant to phone bank. But then… I just did it. And actually it wasn’t that bad. In fact, it was kind of fun. And I’ve heard that repeatedly echoed by other phone bankers.

The first thing to realize is that the people we’re calling actually are not strangers. They’re our fellow TAG members. And by calling them directly, we are doing them a great service: we are sharing information, giving them a forum to express their opinions, and waking them up to the realization that now is the time to come together and act in solidarity. If you’re nervous while phone banking… if your voice cracks… if there are some awkward moments… that’s okay. What’s important is the message that you’re sharing. And your fellow TAG members will appreciate it. All of my conversations so far have been rewarding. In fact, my very first conversation randomly connected me to a former colleague and friend. Also, I’m pretty sure phone banking has improved my social skills by upwards of 7%. So if you’re on the fence about phone banking, consider giving yourself that little extra nudge. I’m glad I did.

Interested in supporting mobilization efforts and connecting with fellow TAG members?  Reach out to mobilize@tag839.org.