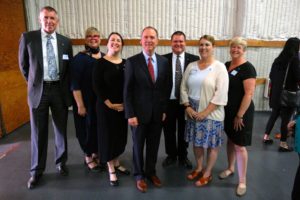 Last Monday, Aug. 5, 2019, Congressman Adam Schiff met with a group of Union organizers and representatives to discuss upcoming legislation, the importance of voting and concerns within the entertainment community.

Schiff asked the question, “What is America?” Reminding those gathered to consider our collective values and understand what is at stake in the 2020 elections. He emphasized the need to be in control of our destiny and turn out to vote.

When an audience member noted that they felt their vote in California didn’t hold as much weight in the election, and asked what one can do so to not feel powerless, Schiff responded by offering two ways that a person can make a difference.

Focus on local races. There are three races the Democrats are focusing on winning in California: Republican Kevin McCarthy U.S. House seat/23rdDistrict; Republican Tom McClintock U.S. House seat/4thDistrict; and Republican Devin Nunes U.S. House seat/22ndDistrict. Though many heralded the “Blue Wave,” he said, we must continue to be vigilant and support change at the local level.

Find a group that shares your passion and work with them. Whether it’s directly through the Union or through another group, get involved locally. The more you care about an issue, the more driven you are to get involved. Your passion can make a big difference in communicating the cause more broadly.

Protecting the Right to Organize or PRO Act – This sweeping legislation, supported by Congressman Schiff, strengthens workers’ rights to strike, to organize, and to pursue litigation against employers that violate their rights.

Cadillac Tax– Congressman Schiff supports the repeal of the Cadillac Tax under the Affordable Care Act. Starting in 2022, employer-sponsored health benefits whose value exceeds specified thresholds will be subject to a 40 percent excise tax. Though insurance companies are the ones being taxed, it’s likely that workers will carry the burden of the expense.

Sen. Casey’s proposal to the Tax Cuts and Jobs Act– Congressman Schiff supports the proposal to claim union dues and expenses as an above-the-line deduction along with most unreimbursed job expenses.

Unions are unable to contribute member dues to national campaigns; however, we can effect change by contributing to the IATSE PAC, a federally-regulated account created for the purposes of raising and spending money to help elect or defeat candidates or oppose legislation seeking to undermine labor rights and interests. Click here to make a small, yet meaningful contribution.

Did you know TAG has a Political Action League Committee? Email robert.st.pierre@tag839.org to learn how you can get involved with our politically motivated group of fellow 839 members!