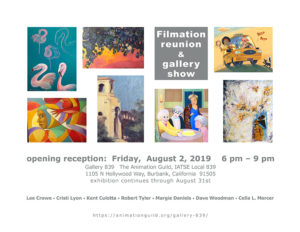 On Friday, Aug. 2, seven artists who worked at Filmation are having a reunion—a visual one showcasing their personal artwork. The exhibit will continue through the month of August so please stop by if you can’t making it to the opening reception at the Animation Guild.

Kent has worked as an artist in newspapers and on film, including several years in the animation industry. His credits include The Little Mermaid, Prince of Egypt, and most recently, Mary Poppins Returns. His first dream was to be a book illustrator and he’s happily making that dream come true. Kent’s most recent projects include illustrations for “D is for Dump Truck”, “The Twelve Days of Christmas in Kentucky”, and the just released “Too Many Tomatoes.” His illustrations have also been published in Highlights magazine. Kent now lives in sunny Southern California and is a member of the Society of Children’s Book Writers and Illustrators.

Lee is a long-time TAG 839 member who has worked as a cleanup artist, effects animator, and timer for Disney, DreamWorks, Warner Brothers, Nickelodeon, Titmouse, and many other studios. Her credits include The Little Mermaid, The Simpsons, Curious George, and Rocko’s Modern Life. She has an Applied Arts diploma from Sheridan College in Oakville, Ontario, and an MFA from Savannah College of Art and Design. She has been teaching animation at the college level since 2004.

For the last 30 years, Margie has worked as an animator on such films as The Little Mermaid, Beauty and the Beast and The Lion King to name just a few. Her job was to focus on one character, and maintain his or her particular look and personality solidly, throughout a variety of settings and costumes, a skill which is also necessary when illustrating children’s books, her current interest, along with writing. She recently embarked on writing a Young Adult novel.

Lyon was born and raised in the L.A. area. She worked in the animation business as an assistant animator and character/prop designer on such shows as Ren and Stympy, The Swan Princess,and Prince of Egypt. She has recently worked at Pasadena City College and Rough Draft studios, and creates fine art pieces with glass.

After receiving her M.F.A. from UCLA in 1990, artist and filmmaker Celia Mercer went to work in the interactive industry as an art director and interface designer. She returned to UCLA in 1996 and teaches traditional and digital animation at the School of Theater, Film and Television. She also works as an independent filmmaker. Mercer’s award-winning animated films have been exhibited internationally and have competed in major film festivals. She worked at Filmation between 1985 and 1986.

After graduating at Chouinard Art Institute where he focused on cartooning and life drawing, he eventually landed a job at the Walt Disney Studios in the mail room. As an African heritage man living in the 1960s, it wasn’t easy to get hired at Disney as an artist. Soon after, however, in 1967, he was given an animation desk and the opportunity to prove himself artistically. His first assignment was working with animator John Lounsbery on Robin Hood. Over the years, he worked for Filmation, Hanna-Barbera, Murakami-Wolf Productions, Chuck Jones Studio, Warner Bros. and more. After 40 plus years in animation, Tyler was ready for a new creative outlet. He turned to fine art, drawing inspiration from many places to depict subjects as varied as landscapes, faces, masks, cars, and music.

As a small boy growing up on a working ranch in Southern Colorado, Dave had the belief that one day he would be an animator for Disney. He not only grew up to be a Disney animator, but he also received an Academy Award Nomination and won a Golden Globe Award for his work. Dave is a Member of the Television Academy and The Society of Illustrators. His illustration and caricature work has received accolades from the greats in his field. Dave has worked for over 20 years in animation on such projects as The Little Mermaid, Beauty and the Beast, Aladdin, Honey I Shrink the Kids (titles), The Prince and the Pauper (Mickey Mouse), He-Man andShe-Ra