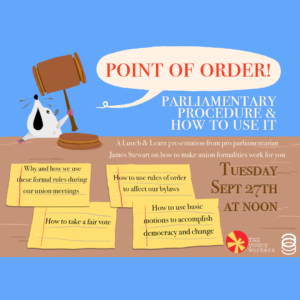 What does Parliamentary Procedure do?

** If Rules of Order are adhered to, a decision will hold up in court.

What does Parliamentary Procedure not do?

The following can also provide guidelines that must be adhered to:

This is the number of voting members that must be present at a meeting in order to legally conduct business. This prevents a minority from controlling a meeting. Normally a quorum is a majority of the members unless the bylaws state differently. For any vote that requires only a majority, this means the next whole number greater than 50%. California Corporate Code states, “In no event shall a quorum consist of less than one-third.”

Minutes are a record of actions taken at the meeting: nothing else. They are factual and succinct. They do not contain personal bias or comments.

Typical Order of Business for Meetings

(This order is not mandatory; it is the most common order from Robert’s Rules of Order.)

Voters cannot explain their vote in the middle of the voting process. Voting may not be interrupted once the process has begun. A member can change their vote up until the moment the vote is announced by the chair.

No one can be compelled to vote. Abstention is not a vote. It is never counted. It is only recorded in a roll call vote, with permission, or by special order. In one circumstance abstention can affect the outcome; if the vote is a percentage of those present, an abstention will have the same impact as a no vote.

The chair normally only votes on a ballot vote or when their vote will make a difference. i.e. To break a tie majority vote.

The chair may vote on any questions. This option must be applied carefully.

What are Improper Motions?

What is the Precedence or Hierarchy of Motions?

There are 92 motions in Robert’s Rules of Order. The following have a specific order precedence. 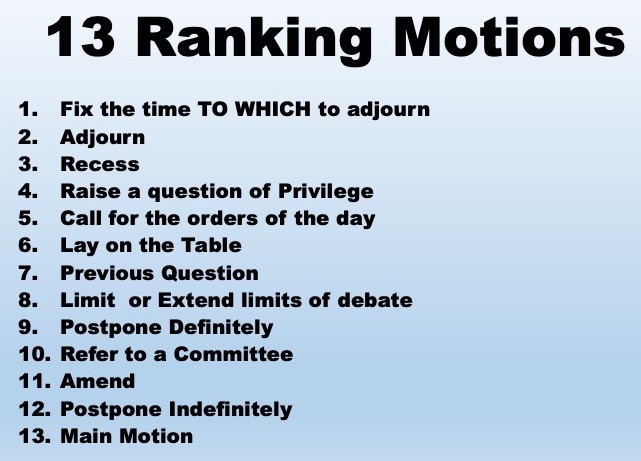 How to Handle a Motion

There can be several motions on the floor at a time, but debate and voting take place on only one at a time.

Main Motion: Brings a new piece of business to the assembly.

Postpone Indefinitely: This is how you kill an issue without voting on it for this session. Must be seconded and is debatable. A majority vote kills the issue for that meeting or convention.

Amend: To alter a motion (add, remove, remove and add, substitute a paragraph or the entire motion). Must be seconded and is debatable. Is amendable one time. The amendment must be germane, meaning it involves the same question as the motion to which it applies. Once the amendment is stated by the chair, it belongs to the assembly. All amendments made must go to committee for a majority vote. The maker of the amendment has the right to speak first.

Refer to Committee: Sends main motion and all adhering motions to committee. This can be a standing or special committee, or a motion can create a committee. Referrals must be seconded. Is debatable. Is amendable as to who’s on the committee. Majority vote required.

Postpone Definitely: This is how to put something off to a specific time. Must be seconded. Is amendable. Majority vote required.

Limit or Extend Debate: To change the time allotted for debate. Must be seconded. Is not debatable. Is amendable as to times. Requires 2/3 vote.

Previous Question: Ends debate. Proceed to vote on the pending question. Alternate form: Call the Question. Must be seconded. Is not debatable or amendable. Requires 2/3 vote.

Lay on the Table: Lay aside temporarily while you do something of greater priority.  i.e. Your speaker arrived and only has a limited amount of time, or you are waiting for someone to arrive. Must be seconded. Does not kill the motion. If laid on the table and not taken off the table by the next meeting, then the motion is killed. Not debatable, but the chair can ask for an explanation.

Appeal Decision of the Chair: Causes the ruling of the chair to be decided by the assembly. Must be seconded. Is debatable. Has to be a tie or majority for the chair to win.

Reconsider: To bring back a motion that’s been disposed of. Requires majority vote to grant reconsideration. May be postponed to another meeting. Can only be moved by someone who voted on prevailing side.

Point of Order: This can only be used to call attention to a potential Parliamentary fault or other rule violation. The chair decides. Can be appealed.

Adjourn: Ends the meeting. Is a main motion if no other business pending. Must be seconded. Is not debatable. Requires majority vote.

This summary is intended to serve as an introduction to Parliamentary Procedure. Please consult an expert for specific issues or questions.

More information can be found at Stewart’s website. He can be contacted at jhstew@earthlink.net.