With almost 4,700 artists, writers and technicians under Local 839’s jurisdiction, the Executive Board determined that our growing membership needs more staff to serve them in the field. Our recent search for a Field Representative yielded several incredibly qualified and great candidates, including Leslie Simmons, who will now work alongside Steve Kaplan to ensure our members are getting the support they need. Meet Leslie here! 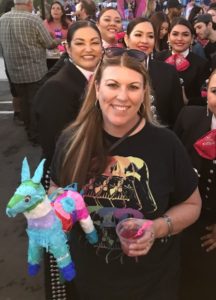 Tell us a little bit about your professional experience.

I started my career as a journalist working for various print and online publications over the course of 14 years, including several L.A. Times community newspapers, Inside.com and The Hollywood Reporter. I specialized in legal reporting for most of my career but for the last couple years while at THR, I also covered the industry’s unions and guilds as well as two studios, Fox and Sony, as a film reporter.

In 2008, I took a position working for the American Federation of Television and Radio Artists (AFTRA) as National Manager of Communications. I was later promoted to National Assistant Director of Communications & Marketing for AFTRA and then the merged SAG-AFTRA.

Working for a large national union like AFTRA introduced me to the other side of the labor movement and I quickly loved the work the union did on behalf of its members. I love advocating for the rights of members! At AFTRA, I worked on several organizing campaigns including those for broadcasters, music video dancers and the big one—the merger with the Screen Actors Guild to form SAG-AFTRA.

In 2015, I left SAG-AFTRA and spent a year consulting for a variety of organizations and labor unions, including the Teamsters, Firefighters Local 1014 and Change-to-Win/Port Truck Drivers campaign.

In 2016, I became the Communications and Field Services Director for the California Association of Professional Employees (CAPE, AFL-CIO), a public sector union representing professionals working for the County of Los Angeles, where I built a communications program, as well as bolstered and upgraded their Delegates program (similar to Shop Stewards).

In addition to the work I’ve done with labor unions, I also teach at the weeklong Grace Carroll Rocky Mountain Labor School. The labor school is one of the last of its kind, providing education for union members and staff, from rank-and-file to elected officers. I teach the Communications course, focusing on how we talk about unions to membership, as well as the public. The course also focuses on utilizing social media and various apps and programs for effective education and outreach.

What will you be doing day-to-day at TAG?

As a Field Representative for TAG, my role is to provide outreach, support and education to our members in the field. My daily routine ranges from studio visits to organizing meetings and negotiations. Along with fellow Field Representative Steve Kaplan, we are here to help TAG members in any way we can, whether it’s a question about the 401k plan or a workplace issue. We’re here to help!

How do you hope to help support TAG members in the industry?

Meeting members face-to-face is the most important part of the Field Representative’s duties. I was a member of two labor unions while I was earning my BA in journalism and in the beginning of my journalism career. I never met one union rep or had anyone from the union visit me in the workplace or send me any communication about member benefits, issues, negotiations, etc.—and these were big national unions! Pulling from my personal experience, I know and understand the importance of providing all the support possible to TAG members and visiting work sites. It’s also a two-way street when it comes to communications with TAG members, so they should not be shy in contacting me or Steve!

There is obviously a bit of learning curve coming into the Animation side of the industry, as opposed to my union experience working with broadcasters, recording artists and performers. But I look forward to learning about the work TAG members do and keeping track of the trends and changes in technology that may affect them. As I’m just starting with TAG, I’m hoping members are open to educating me on the work that they do so that I can better represent them!

Tell us a little bit about yourself personally?

I’m a native Angeleno, born and raised in the San Fernando Valley. Burbank is a second home to me as it’s my dad’s hometown and I’ve lived here now for 19 years.

Although I don’t have a background in Animation, I like to say that Animation built our family here in Los Angeles. My grandfather was a lead violinist in the Disney Orchestra going back to the Silly Symphonies through Bambi (his last film before he died in 1942) and an oil painter active in the Laguna Beach arts scene. He was a member of AFM Local 47 so unions also built our family! Plus, my brother is an artist for Imagineering so I grew up watching his creativity blossom!

I’ve participated in 13 marathons, several more half marathons and 5ks but due to injuries, I now just enjoy hiking our beautiful mountains here and abroad. I love traveling!

I also believe deeply in giving back. For 27 years I was a volunteer zookeeper for EFBC’s Feline Conservation Center. I now volunteer for Downtown Dog Rescue, supporting their Skid Row Pet Resource Center and monthly low-income pet clinic in South LA. I also volunteer when I can for the California State Parks Foundation and Mountains Restoration Trust.

I’m a die-hard Los Angeles Galaxy fan and season ticket holder, as well as a fan of Manchester United.