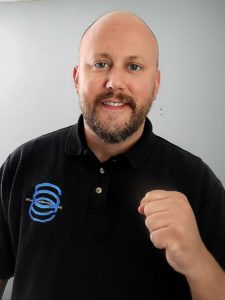 With an interest in the labor movement that dates back to his college years, Ben Speight,  our new Animation Guild organizer, shares lessons learned from his first organizing experience, why he feels that organizing is the key to reducing inequality, and his belief in the importance of committed worker activists.

Tell us a little bit about how you got your start in organizing.

My anti-war and anti-racism activism in high school turned into an interest in the labor movement during my freshman year at Valdosta State University in South Georgia. I was a food service worker on campus and founded the “VSU living wage campaign” with my roommate in the summer of 2001. Our student- and worker-led effort began holding mass meetings to demand an end to poverty wages and racial/gender disparities on campus. My boss at the food court shortly responded by firing me, giving me my very first first-hand lesson in anti-union retaliation!

Our group would later affiliate with the national student labor organization, United Students Against Sweatshops, where I was introduced to student-labor organizers from across the country. After three years of organizing by trial and error, we won an across-the-board wage increase for all campus workers and forced a public discussion around discriminatory practices impacting the university’s labor force.

I learned a lot in those early years about what to do and not to do while building working people’s leadership skills on the job. I went on to volunteer with a teachers’ union while studying in Japan, worked for the service employees’ union organizing home health care workers in Michigan, represented hotel workers at a casino outside of Sacramento, then returned to Georgia to work at UPS, becoming a Teamster shop steward and later a full-time organizer.

In general, how does an organizing campaign work and why is it important?

The last place that you’ll find democracy is on a non-union worksite, and everybody who works there knows it. The boss rules, and workers have little to no say. The only force that can change that is the workers themselves. In fact, that’s the history of TAG—animation workers organizing their own workplaces and gaining leverage over employers across this entire industry.

Throughout that history, the industry has never really accepted that shared power relationship and has always sought ways to evade standards by exploiting artists without the same rights. Organizing then is the fight to expand democracy in the economy via workplace organization. Without organizing, as the saying goes, unions die. The good news: TAG is serious about organizing, and we are well on our way towards the goal of organizing animation workers far beyond L.A. County.

The basic building blocks of forming a union have not changed much since the passage of the National Industrial Recovery Act in 1933, the first federal legislation legalizing collective bargaining in the private sector in the U.S. Whether through a government-supervised election or by demanding voluntary recognition from an employer, workers organizing themselves together around their common interests is the very definition of a union. This process of union-creation is confronted in every way by the attempts of the employers to undermine, divide, and defeat any effort of workers to come together. An organizing campaign is nothing but the struggle between workers and employers to establish a union where one does not currently exist, bringing democratic processes to the workplace for the first time.

What do you think are the most important elements of an organizing campaign?

It’s not enough just to fight for what is right. The point is to win. In union organizing, that means building support among a super majority of co-workers who are often different from each other yet share common interests on the job. By forming a core group of organic leaders and committed worker activists in the workplace, the organizing campaign seeks to overcome fear of retaliation from the boss by building support among co-workers in all classifications and social groups.

From the origin of our movement, unions had to organize new workers in new workplaces in order to maintain and expand their power in bargaining with employers. Unions that fail to organize non-union workers and expand their strategic power in an industry have inevitably faced demands for concessions from existing unionized employers to eliminate the higher standards they had collectively fought to create over the years. Only by organizing non-union workers can unionized workers protect themselves, bringing the workers with worse working conditions and lower pay up to their level. Organizing then leads to the reduction, if not elimination, of disparities and inequalities between workers doing the same work, wherever they live, regardless of their background and identities. Union organizing then is not just about expanding democracy but creating a more equal environment for all, on and off the job.

Please share some highlights from a successful campaign you’ve worked on in the past.

Neither of my parents were in unions. I had to go back two generations to find roots in union organizing. So when I started working in the labor movement, my examples of success were only in history books. That was until I organized a group of workers in a campaign of bus drivers and mechanics in three elections at Emory, Georgia Tech, and Georgia State in 2008. Every election was won by an over 90% margin of victory. I led negotiations on the first agreements and witnessed the workers’ pride as they ratified their first union contracts.

So many lessons were learned in my first campaign with the Teamsters, but the highlight was the story of Kathy Stafford, a bus driver at Georgia State University. When I was initially getting contacts among GSU bus drivers, people kept mentioning the need to talk to Kathy, a sign that she was a natural leader on the job. I made it my mission to meet her at her home when she was off. But every time I knocked on her door, a man living with her would come out and tell me she wasn’t there and wasn’t available.

One day, I finally caught up with Kathy in the bus lot and recruited her to the organizing committee. She became the central leader of the committee and led her co-workers to win the union election with a unanimous vote. She was soon elected to serve on the negotiating committee and helped lead bargaining for the GSU drivers first union contract. At the ratification vote, I asked her, “whatever happened to the guy you were living with when we started the campaign?” She said simply, “Ben, this whole thing has given me so much confidence. I kicked that deadbeat out. I don’t know where he is.” I knew right then that this organizing work was far bigger than just winning a raise and grievance procedure—it was about creating new social structures and changing lives. I went on to organize truck drivers, sanitation workers, health care workers, government employees, and now animation workers. The beautiful, strong, and brave people I meet and the sense of power they gain through their own efforts motivates me everyday.

What are some of the training sessions you’ve crafted for organizing committees, and what can people who attend these sessions expect to learn?

TAG now has a complete four-part training series on organizing. Already, dozens of animation workers at studios across the country have participated in the organizing training and are applying the lessons learned in their own workplaces. Each training session is approximately two hours long. The first module focuses on leadership identification and recruitment to the organizing committee. The second is all about holding an effective, one-on-one organizing conversation. The last two sessions focus on the bosses’ campaign of divide and conquer and how we overcome that resistance by mapping out and leveraging our own collective power. It’s been great to see the participation of TAG Executive Board members, staff, and volunteer worker leaders both in L.A. and at studios across the U.S. I’m confident that in the coming months there will be a unionized animation studio in the U.S. outside of L.A. county for the first time in decades.

How can TAG members help the Union’s organizing efforts?

If you know animation workers that want to organize for a collective voice, ask them to email TAG at organize@tag839.org. Interested in supporting TAG’s organizing efforts, attending an organizing training, or amplifying TAG’s call to organize within the animation industry? Email me directly at ben.speight@tag839.org.