Ann Guenther began her career in animation as an inker on Sleeping Beauty.

In those days, she was fresh from Pennsylvania, without money or contacts in the business or very much artistic training. One bright morning on the Disney lot, she encountered Walt Disney. He asked her, “What are you doing here so early?”

She answered, “I get here early every morning, Mr. Disney. I have to, because I hitchhike to work.” Ann was eighteen at the time. And Walt Disney was surprised.

Ms. Guenther returned to Disney as a full-fledged background artist after working on the lot as an inker in the late 1950s, one of the first individuals to ever accomplish this feat.

Ann departed the studio after a background artist she trained was promoted to head of the b.g. department. (Then as now, the animation industry was a Boys Club.) 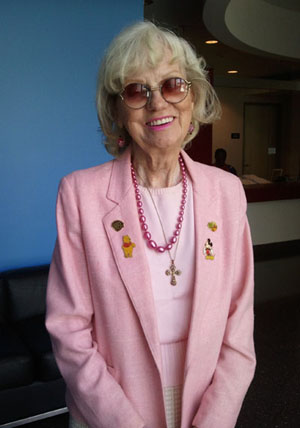