Randy Cartwright was part of the Disney animation renaissance that happened in the 1970s. He’s been working as an animator, story artist, and supervisor for the past thirty-five years.

Trained in art and motion pictures at UCLA, Randy submitted multiple portfolios to Disney veteran Eric Larson before being hired by the studio in July 1975. During his first week on the lot, he was invited by supervising animator John Lounsbery to view a rough cut of The Rescuers, and ended up working on it as Ollie Johnston’s assistant. When Ollie retired, it was a couple of quick steps to the position of supervising animator.

One of the few filmed records of Disney animation in the eary 1980s came about because of Mr. Cartwright’s eagerness to try out a new sound 8 millimeter camera.

The camera had a ten-minute cartridge, and I wasn’t sure what to shoot. Then I decided to make a real-time documentary walking through the Disney animation department …

With his assistant John Lasseter serving as director of photography, Randy wandered up and down the halls, walking into the rooms of surprised animators. The whole thing, of course, was unauthorized and pretty much illegal, but today the film is stored in the Disney archives, a little piece of thirty-year-old studio history. 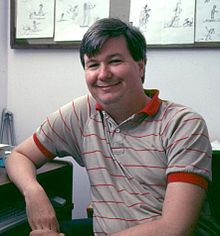