Didier Ghez sent Jeff Massie a partial transcript of an interview that John Culhane did in March 1971 with Reginald Massie in the summer of 2011. Reg worked for Disney, UPA, Screen Gems and George Pal in the 1930s and 1940s.

With the permission of and thanks to Didier and John, the linked podcast is a reading of that transcript with Steve Hulett as John Culhane and Jeff Massie reading the part of his father, Reg.

After the Disney strike, Reg Massie worked briefly for Screen Gems, George Pal and UPA. After Pearl Harbor the Army commissioned him as a Staff Sergeant in charge of effects animation for the Signal Corps Photographic Center in Long Island. He worked with Frank Capra on the “Why We Fight” series and with John Huston on “The Battle of San Pietro,” as well as numerous training films. In 1942 he married former Disney inker Nancy Bedell, whom he had met during the strike.

After the war he returned to George Pal, where he worked on several of the Puppetoons (his screen credit was “Backgrounds” but Gene Warren confirmed to Jeff that Reg more or less designed everything but the puppets). 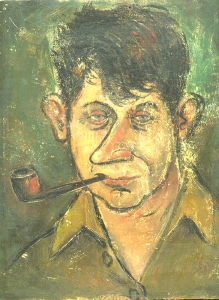