Russ Edmonds was working as an engineer at the Three-Mile Island nuclear plant when an urge to work at another job overcame him.

A self-taught artist, he wrote Disney Feature Animation inquiring about work in Cartoonland. Disney suggested that he knock on California Institute of the Arts door, which he did. And a few, short years later, he was animating on Brad Bird’s “Family Dog” and getting himself hired at Disney Feature.

Mr. Edmonds’ first assignment at the Mouse House was animating on Oliver and Dodger, the leads in Oliver & Co. Management was so pleased with the work that he found himself working on more four-legged characters.

Through most of the nineties, Russ was one of Disney’s quadruped specialists. He supervised the sheepdog Max in The Little Mermaid, the lioness Sarabi in Lion King, the ape Kala in Tarzan, and an abundance of horses in Home on the Range.

But it’s good when all your interests conjoin, yes? 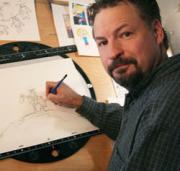