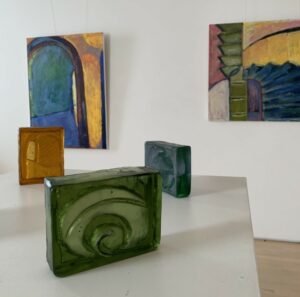 Gallery 839 is a nonprofit gallery featuring art by members of the Animation Guild, IATSE, Local 839. Artists on exhibit are tried-and-true in their fields of animation and visual art, offering a unique merging of the Union and fine art worlds.

At this small gem in Burbank, the artwork is diverse and eclectic. The Animation Guild’s first gallery opened in 1962, and its current Gallery 839 launched in 2010. Over the years exhibitions have included media such as pottery, ceramics, bronze, poly resin, paint, pencil, glasswork ,and more.

The gallery is home to individual and group shows, and artists receive 100% of the commission from their sales. Better yet, the work is affordable. At monthly openings, the public can enjoy art and refreshments while mingling with the artists behind today’s popular movies and TV shows, as well as animation industry legends. 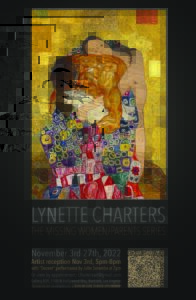 The Missing Woman/Parents Series references well-known paintings throughout history. It is a playful yet earnest look at how women are presented but not represented in art, society, and history. The image of the woman’s body is omitted from renderings of famous paintings, leaving on show the board it was painted on, to highlight the lack of documented female genius recorded in history, lack of societal appreciation and wage equality, lack of proportional representation in politics, and other disparities. Some of these disparities have been exacerbated with the mass exodus of parents from the workforce to care for family members during the pandemic and are due to worsen yet more with the current attacks on reproductive rights. From a young age, women are encouraged to succeed and at the same time take on supportive roles. They juggle multiple responsibilities, all while being underpaid and pressured to look picture perfect—all of which are themes that underscore this thought-provoking exhibition. 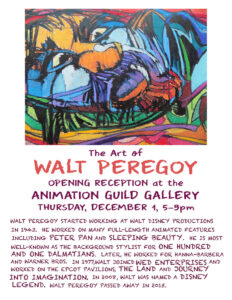 This one-of-a-kind show represents a sampling of Walt Peregoy’s personal sketches and paintings, much of which took inspiration from whatever caught his interest at the time. Peregoy enjoyed working in a variety of mediums, including charcoal, pastel, paint, ink, graphite—essentially, like any true artist, anything he could get his hands on.

Walt Peregoy started working at Walt Disney Productions in 1943. He worked on many full-length animated features including Peter Pan and Sleeping Beauty. He is most well known as the Background Stylist for One Hundred and One Dalmatians. Later Peregoy worked for Hanna-Barbera and Warner Bros. In 1977, Peregoy joined WED Enterprises and worked on the EPCOT Pavilions, The Land and Journey Into Imagination. In 2008, he was named a Disney Legend. Peregoy passed away in 2016. 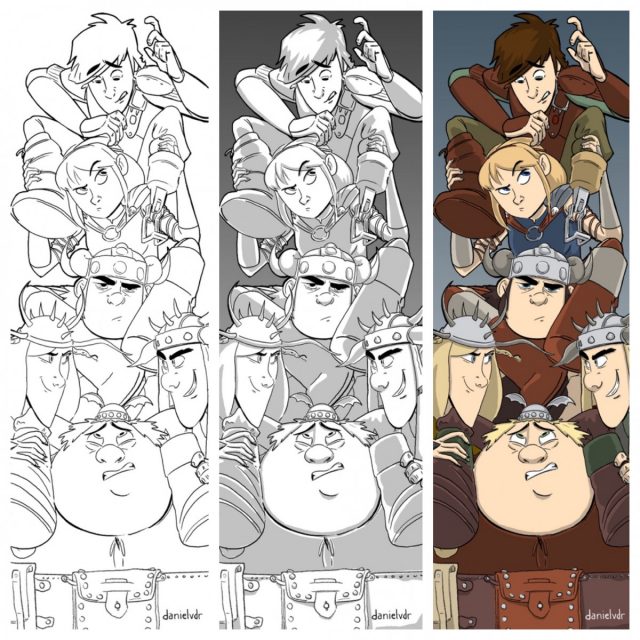 Gallery Openings
Show openings are usually the first Thursday of the month from 5pm–9pm and are free to the public. Masks required.

When to Visit
People are welcome to visit the gallery for the remainder of the month during business hours but must make requests in advance. Email jupey.krusho@tag839.org.

Past Shows
Check out the archives of artists who have displayed their work at Gallery 839.