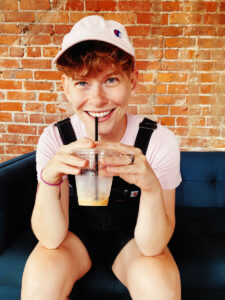 Tell us a little about your professional journey.

My IATSE origin story begins like all good origin stories: in New Jersey. I was a sound engineer for a New Jersey venue, and though my position was not union-represented at the time (it has since become so, yay!), other backstage stagehand positions were. I experienced a lot of sexual harassment and disrespect in that job, but the venue’s IATSE stagehands always treated me with respect and dignity. I walked away from that summer job knowing two things: I could have a viable, economically sustainable career in entertainment, AND the second I got the chance, I wanted to be an IATSE member.

Cut to 2013—I’m a sound engineer at a nightclub in western Massachusetts, experiencing more workplace injustice (having meal breaks taken out of our paycheck without ever actually have a meal break, delayed paychecks, unsafe working conditions, sexual harassment). When my coworker asked if I was interested in joining the effort to organize with IATSE Local 232, I enthusiastically said “yes.” It wasn’t easy: Our boss is still making a name for himself as a prolific violator of labor laws. But with our solidarity, the guidance of International Vice President Dan DiTolla, and the leverage we created by leafletting to the public, we forced the employer to negotiate a contract with us. We won our election and a contract (which is still in existence today), and we were all offered membership in the Local.

It took several years before my purpose as an organizer found me: I worked as a union and non-union stagehand (gotta pay those bills), produced and toured social justice theater shows, created a training for IATSE workers to educate students on entertainment careers and why respecting copyright is important to those careers, and worked in academia (honorable mention to academia for also being super good at taking advantage of its workers). Eventually, the opportunity to become an IATSE Stagecraft International Representative found me, and I jumped on it! For the past four years, I’ve helped Locals negotiate contracts and organize workers (Salt Lake Film Society, The Wallis, LA Opera Costume Shop). Over that time, I’ve realized that organizing is where it’s at for me. Empowering people to fight back against injustice and unfairness? Yes, please!

What is your role at TAG and what do you hope to accomplish?

I’m an Organizer, which in very abbreviated terms means I help animation industry workers who want a collective voice in their workplace form a union and join TAG!

I’m looking forward to joining and building on the organizing momentum TAG members, elected leaders, and future members have cultivated (also shout-out to fellow organizer, Ben Speight, for his incredible work in this arena). External organizing (bringing in new members) and internal organizing (invigorating and connecting existing members) are inextricably linked, so the more external organizing TAG can do, the better positioned TAG members will be to accomplish their contract goals in the future. Added bonus: raising the standard of wages and working conditions of animation industry workers all over the country!

How do you hope to support animation workers in general?

I hope to continue fostering the waves of animation industry workers who are advocating for better wages and working conditions. I aim to be a resource about their rights in the workplace, to be a source of support, encouragement, and strategy, and to help welcome in as many new TAG members as possible!

How do you approach your organizing work?

Lately, I’ve been really vibing with the idea that “empowerment is long lasting and energizing.” There are narratives out there that forming a union is rooted in the negative: “I want to organize a union because I hate x about my job” or “My job is exploitative and that sucks.”

Those things can be true… AND people choose to organize a union because they LOVE their careers/jobs/co-workers/etc. Forming a union is an essentially optimistic and empowering endeavor because it emanates from the idea that “there is always room for improvement”. To have room to improve means there’s something worth improving in the first place.

How can TAG members support the work you do?

Engage with your Union! Attend meetings, join a committee, volunteer to do one thing. This Union is only as strong as its members’ bond with each other. To win big victories, we need empowered, engaged, and energized members.

Bring a union-minded spirit to work with you. One of the best ways to inspire other animation workers to organize is by demonstrating union principals at work. Whether that’s standing up for safe and respectful workplaces, talking about the benefits a union contract can offer, or dismantling the status quo of wage secrecy, our actions can have unseen ripple effects with workers who envision something more for themselves and their careers.

Can you share a little bit about yourself personally?

As you can probably tell, my background is in theater. I did a stint as a children’s theater performer, though most of my time has been spent as a technician, designer, and producer. Live entertainment has similarly exploitative and punishing hours and working conditions as animation, so I feel a kinship with animation workers. Ah, the beauty of shared trauma.

Speaking of… I channeled my pandemic trauma into converting a van into a camper.

I have a dog named Rudy. He is the best boy. He’s very food motivated and is an excellent napper.

I love volunteering for Girls Rock Camp, a social justice non-profit dedicated to empowering girls and gender expansive youth through music. This camp has iterations in cities all over the US. I’ve volunteered in Boston, LA, and Detroit. While each camp is unique, they are all driven by a similar mission. It is the only other thing (besides organizing) that I’m an evangelist about. 2023 will be my 10th consecutive year volunteering (and my 10th anniversary as an IATSE member)! Check them out!

I’m also on the Next Generation Board for the Motion Picture Television Fund, a non-profit that supports entertainment industry workers in SO many ways (child care for show biz hours, veterans assistance, and amazing social workers, just to name a few). We aim to make supporting this amazing organization more accessible for industry workers earlier in our careers, and I’m stoked to amplify the IATSE and TAG’s engagement with this organization.