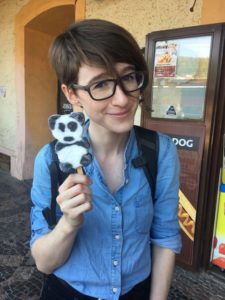 Tell us a little about your background.

I graduated with an Illustration degree from RISD and, not really knowing what I wanted to do with my life, moved out to LA. About a year later, I happened to be in the right place at the right time, and started working as a background designer on Steven Universe, then OK K.O.! Let’s Be Heroes as a background painter, and most recently, as a 3D prop designer on Monsters at Work. In between were some illustration freelance jobs.

How did you get involved in the Guild?

My involvement in the guild started pretty casually—going to General Membership Meetings, followed by the Young Worker Committee meetings, then Lunch and Learns, and, ultimately, volunteering to be a District 2 Convention Delegate. At the end of the day, I try my best to simply show up: to be informed on what’s going on with other union members, the industry as a whole, and the status of unions.

What are you looking forward to seeing accomplished?

I’m really excited to see what the new member database can bring to the table for our union, especially in regards to making the union more accessible to our membership. I’d also love to see a revamp of a new member information packet!